Showing posts from June, 2010
Show all

- June 30, 2010
I have loathed my wip. Last year, when I'd been working on it for a while, and agents had been rejecting it right and left, I revised and revised until the words just melted into one molten mass of Sucks Rocks. Every revision seemed to drag it further into the abyss of Suckiness. Now, returning to it after ten months hiatus for a fresh look, I was mildly surprised upon reading it. I enjoyed reading it. Hey! My wip improved while I wasn't looking! How did that happen? Were the revisions worth it? Yes and no. In some ways, I think the original story as I conceived it -- all one book -- was solid. It was 180,000 words, however. Way too long to have a chance at publication. The excess might have been all fat, but I didn't (and still don't) think so. It had to be that long because of the number of characters, the amount of world building, and the number of plotlines. In early revisions, I cut it down to 140,000 words, and frankly, eviscerated it. There's a reason
8 comments
Read more

- June 30, 2010
There are new agents in my genre since I last looked. Naturally, I had to pester them with queries on my Dindi novel. I read up on them, winnowed down my list to the ones who seemed awesome, and queried yesterday. One agent replied today! Reject, of course, but wow, that's fast turn-around. I know it's not good form to email a thank you, because agents have too much mail already, so I refrained. On the unlikely chance that the agent in question, or any other agents, read this blog, I will simply offer my thanks here. You rock. Thanks for the quick and courteous reply.
Post a Comment
Read more

- June 29, 2010
I did the equivalent of housekeeping on my novel -- picked it up, dusted it off, removed a bit of grime and mildew, and then set it down again. Actually, my literal housekeeping is nothing like this. If I need a clean house, the easiest way is to move. Yes, that's how messy my house is. Ahem. Anyway. Hopefully my mss is not in the same shape as my desk. I know I've said this before, but I don't want to re-write my mss again. Enough revisions, time to let it rest and move on to a new project. Yet, being obsessive, I couldn't refrain from re-reading it and making just a few little changes.
2 comments
Read more

What I've Been Up To

- June 25, 2010
I have more or less neglected this blog for ten months, so I ought to post an update. I've been in graduate school, which, unsurprisingly, consumed my time and my writing. If my program weren't so writing-intensive then I probably would be writing more genre fiction, but since the "writer" part of me is dominated by for-school projects, I have no juice left for other creative work. I have considered sharing some of my school work here, but, upon consideration, preferred to keep it separate. I LOVE grad school. Though the work load is stressful, I find it immensely fulfilling. Regretfully, right at the end of the year, I had a dispute with my adviser about the future of my work. I will have to either find another advisor next year or leave the program. This depresses the hell out of me, both because I hate conflict and because the thought of having to transfer to a new school and essentially start over exhausts me. Oh, and I had another baby. He's now three weeks
4 comments
Read more 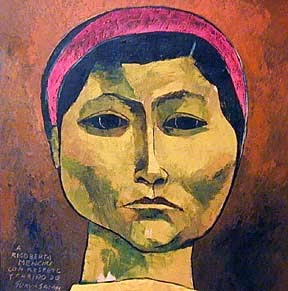 I heard a story once, and I should caution that I don't know if it's true. If it were about a dream come true, I would have reason to doubt it, but it is rather about disappointment come true, so I find it believable. A woman born in a Central American country in the midst of a civil war fled from the violence as a child. Her name, shall we say, was Grace. She was terrified that she would die, but one night she had a dream, in which an angelic figure, or maybe a woman who looked like her dead grandmother, or maybe the Virgin Mary -- I don't remember, and maybe she herself didn't either, by the time she shared the story -- told her, "You will not die, because you are going to achieve a Great Thing in your life, and God will keep you alive." Grace was greatly cheered, not only by the knowledge that she was going to live, but that she would live with purpose, with an important destiny. As a child, she never told anyone her dream, but she cherished it in her
2 comments
Read more

- June 21, 2010
Postmodern philosophers and novelists share an obsession with words-for-their-own-sake, and indeed, I would say that the philosophers take this to an extreme beyond that achieved by mere novelists. Philosophers, unlike novelists, are not tied down by the necessities of plot and comprehensibility. I believe the quote at the beginning of this video illustrates my point. Her words are so beautiful I could bathe in them. But what does that mean, exactly? http://markfullmer.com/film/kristeva-rap-video
Post a Comment
Read more

- June 21, 2010
I've been too busy for this blog lately, but I may have a bit of time during the summer months for fiction, we'll see. I always tend to overestimate my available time and underestimate my work load, so no promises.
1 comment
Read more
More posts